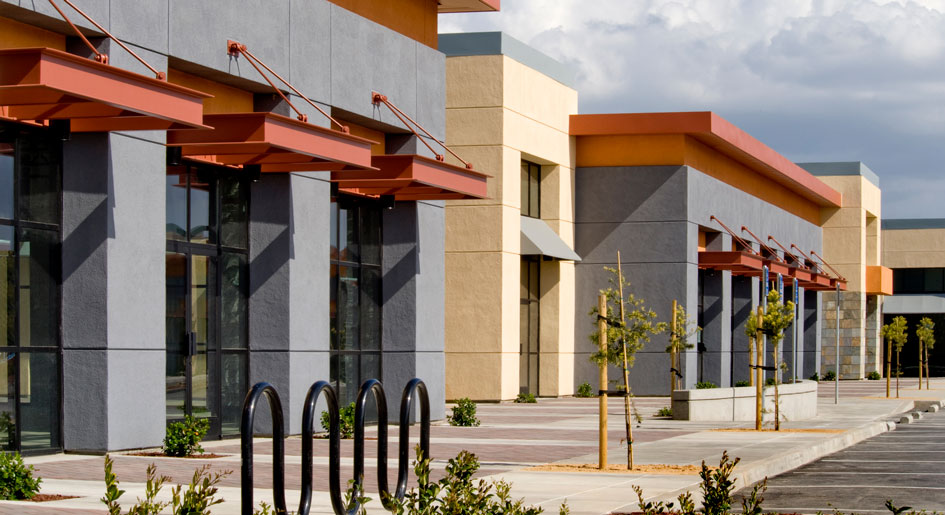 Elevated Interest Rates Not Having a Major
Impact on Household Spending

Consumption activity rebounds after first monthly decline. Retail sales in August tracked upward by 0.7 per cent month-over-month, which comes after a 2.2 per cent drop in July — the first decline since interest rates began to rise. Retail sales are now up 19 per cent since January 2020 and 6.6 per cent year-to-date. This uptick in August suggests that elevated prices and interest rates have yet to significantly impact household spending activity. This could partially be attributed to Canada’s relatively healthy labour market, which has added roughly 172,000 jobs this year as of September. While this is positive in terms of GDP growth and the potential for a soft landing, it further solidifies that the Bank of Canada will continue its hawkish approach to monetary policy. Some broad-based indicators of slower inflation are emerging, however, with shipping rates lowering, commodity prices declining and supply chains re-establishing.

E-commerce sales trend upward. Despite a slowing economy and rapid inflation, online shopping remains healthy. E-commerce sales rose 5.0 per cent monthly in August, translating into an 8.4 per cent annual increase. While this is down nearly 12 per cent from the highs in January 2021, online sales are up 95 per cent when compared to pre-pandemic times. This, again, is likely a factor of Canada’s relatively healthy labour market, as well as some consumer spending habits that have been slow to revert, following a broad transition to online shopping brought on by the health crisis. Nonetheless, with uncertainty ahead, it is likely that both online and traditional retail sales will soften. Robust growth over the previous two years, however, makes it unlikely that online sales will drop below the 2019 level.

Industrial demand remains persistent. Industrial vacancy declined 60 basis points to 1.1 per cent from January 2020 to September 2022, while the average asking rent increased by nearly 30 per cent. A byproduct of the global health crisis and the surge in e-commerce utilization, almost all large-bay warehousing and distribution space has been absorbed, spurring a surge in investment activity. While online shopping has cooled since early 2021, it is on the rise again in 2022, despite economic uncertainty and a potential recession. This sustained growth in e-commerce, coupled with the lack of available development land and the increased presence of onshoring, will likely act as a backstop to a slowing economy, supporting a low vacancy rate and further double-digit rent growth.

Grocery-anchored retail a preferred investment option. During the health crisis, food-anchored retail plazas gained attention from the investor community as a result of the relatively essential nature of the product, the well-covenanted tenants and the high returns provided to investors as cap rates sit around 5.5 per cent. Looking forward, grocery-anchored retail should likely remain a favoured investment vehicle, as even in the face of economic headwinds, consumers will need to purchase basic necessities like food. This is why grocery-related sales show limited volatility, resulting in positive investor sentiment. Sales are up 4.9 per cent year-to-date and 13.3 per cent since January 2020. 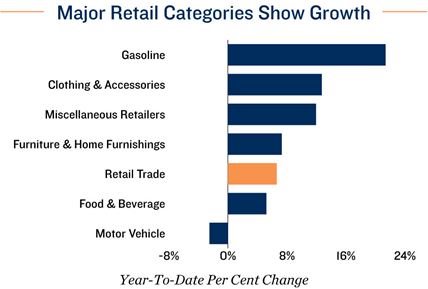 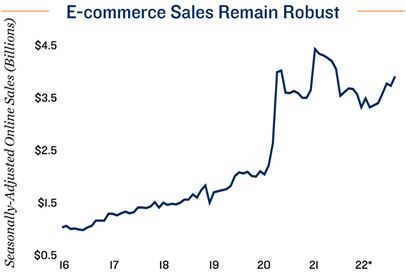